Join 262 other followers
Follow It Is Finished on WordPress.com 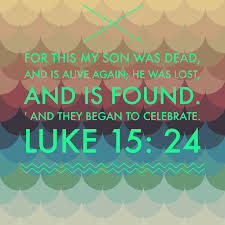 What a beautiful description Luke 15:24 is of the Father’s love for us.  Truly His heartbeat is restoration and His response to our being restored to Him is to celebrate over us!!

Zephaniah 3:17 in God’s Word Translation says “The LORD your God is with you. He is a Hero who saves you. He happily rejoices over you, renews you with his love, and celebrates over you with shouts of joy.”  I love that.

Psalm 91:15 He says He will rescue us and then throw us a party.

The more I meditate on His goodness, the more I see Him in this light…. rejoicing over me, renewing me with His love, celebrating over me and throwing me a party!!  I begin to see Him as Love… extravagant, lavish, outpouring, overflowing Love towards me!  This is the picture of the Father that Jesus is showing us in this parable… a picture of a Good, Good, Daddy.. full of chesed (Covenant Love) toward us (for more on chesed see my post Goodness and Grace).. a love that just won’t let us go!!

BOTH SONS HAD A DISTORTED VIEW OF THEIR FATHER

The Greek word for son is ‘huios’ and means son… a son having the nature of the father; a son representing the father — this is a word of position.  As opposed to the Greek word ‘teknos’ which means child…  meaning one not fully grown or mature, still needing to be under tutors and governors (Galatians 4:2).

God has called us as sons…. Ephesians 1:5  Having predestinated  (in Greek: proorizo…determined our destiny) us unto the adoption (in Greek:  huiosthasia… declaration of sonship) of children by Jesus Christ to himself, according to the good pleasure of his will”.  How awesome and powerful is that truth!!  Before the foundations of the world, He determined and established our destiny as His sons… being conformed to the image of the Firstborn Son.

He had 2 sons… both were huios.  We are first introduced to the elder son as a huios (Luke 15:25)…  again meaning having the nature of the father; one representing the father — it’s a word of position.  But his distorted identity was based on works… on what he did for the father instead of who he was.  Verse 29 gives us a glimpse of how this son saw himself.  “But he answered his father, ‘Look, all these years I have served you and never disobeyed a commandment of yours. Yet you never gave me even a young goat so I could celebrate with my friends.”  The word served is douleuo which means “to serve as a slave” — slave is “doulos”.  This was the distorted the view the son had of himself.

He was a son, not a slave but he saw himself serving as a slave…. not as a son!  And the rest of the verse gives his distorted view of the father… not as an extravagant, generous father but someone withholding from him — even something as small as a goat to celebrate.

The younger son is introduced in verse 12 also as a huios…. again meaning having the nature of the father; one representing the father — this is a word of position.  His distorted view of his identity was based on his inheritance.. what he would possess at his father’s death —  his priority was on his inheritance instead of relationship.  Although even after he leaves with the inheritance, he is still called a “son” (huios).  His position hadn’t changed even though he walked away from it.

Later in the story, he comes to his senses and realizes he has sinned against heaven and against his father and decides to tell his father he is no longer worthy to be called “a son” but instead a hired hand (with no inheritance).  But the father’s response is one of love and although the son no longer sees himself as a son but a servant, the father sees him the way he always has… as a son… his son.

HE ALWAYS MAKES GRACE AVAILABLE FOR US

Redemptive grace was offered to both sons to see themselves as they truly were and to see the father as he truly was.  While we know the younger brother repented (changed his mind to align with the father’s) and began to see clearly who he was, sadly we never know if the elder brother repented, if his heart was healed and if he embraced his sonship.  But we do get a glimpse of the condition of his heart in looking further into how the father referred to him.  In verse 31 the father calls him son but the Greek word used is teknos instead of huios;  Teknos means child — a member born into the family but immature; not yet transformed into mature sons who are able to represent the father and administer the father’s house and his belongings.

We are sons of God.  And our Father is a good Daddy to us.  Ask Abba Father today to reveal this truth to you…. begin to see yourself in Christ… as joint heirs with Him, carriers of His glory, made in His image and as a representative on earth of all that He is and all that He is… and then begin releasing that to those who have lost their way!