Join 262 other subscribers
Follow It Is Finished on WordPress.com

Now the LORD said to Moses and Aaron in the land of Egypt, “This month shall be the beginning of months for you; it is to be the first month of the year to you.  ~ Exodus 12:1-2 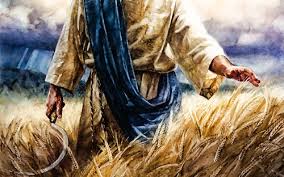 Last year as we entered into the Hebrew month of Nisan I woke up to a song in my heart and on my lips… “it’s a new season, it’s a new day….a fresh anointing is flowing my way…a season of power and prosperity…..it’s a new season coming my way.”  And in prayer, I kept hearing God say “new day, new day!!”  Then He led me to Joshua 1:2 “Moses my servant is dead. Now therefore arise, go over this Jordan, you and all these people, into the land that I am giving to them, to the people of Israel.”   All of this happened in the Hebrew month of Nisan.  A new day had come for the children of Israel…  the old way of living (in the Wilderness) was over and it was now time to cross over into the Promise Land and receive all that God had promised them.

On this past Friday evening we entered into Nisan… on Saturday morning I woke up with an expectancy of something new.  It felt as if something in the atmosphere had shifted.  Saturday was also the day of Azusa Now in Los Angeles (which marked 110 years anniversary of the Azusa Street Revival) as well as United Cry DC in Washington DC.   East coast and West coast worshipping together and crying out to God on the same day for revival in our land!  A day of unity in the Body of Christ.

I believe we have entered into a new day… Saturday marked a day that everything changed… an historic day for us!  For our nation!  And not coincidentally it happened as we entered into the Hebrew month of Nisan.  The month of Passover… a time of liberation, personal change, going from slavery to freedom, and the emerging out of the old.

Saturday I believe we “passed over” into a new season… a season that has shifted us and positioned us for the next Great Awakening.  Rev. William Seymour, the leader of the Azusa Street Awakening, prophesied that in 100 years there would be an outpouring of God’s Spirit and His Shekinah Glory that would be greater and more far reaching than what was experienced at Azusa.

REVIVAL — A TIME OF GREAT AWAKENING IS UPON US!

Revival is defined as to live again, to receive again a life which has almost expired; to rekindle into a flame the vital spark which was nearly extinguished.  Another great definition I read is “The Spirit of God working through the Word of God, in the lives of the people of God.”

Passover (which is in Nisan) is a time of revival and spiritual renewal, a restoration of the Power and Glory….a renewed interest in God!  In Nisan the children of Israel shifted into a new season… a season of liberation as they followed Moses, the revivalist, out of Egypt.  The children of Israel had been enslaved for 430 years and in Exodus 6 God told Moses that He heard their groanings….and He responded to their prayerful cries and to the hearts of His people… there was a revival of His covenant with Abraham.

Zech 10:1 tells us to ask the Lord for rain in the springtime…. this month is a time to ask for the rain of His presence.  I loved that on Saturday the 8th (Azusa now and United Cry DC) it rained here in California and also in DC…. in fact my Facebook post that morning was Hosea 6:3 “He comes like the rain”.  That day on Facebook I saw two different photos of rainbows… one over the colosseum in LA and two double rainbows a few days before over the Washington monument and the US capital.

It is also the month that the King had favor on Nehemiah and granted him permission to return to Jerusalem and rebuild the wall.  This was another time of revival for Israel…. in Nehemiah chapter 8 the people gather as Ezra reads the Word of God.  They stood listening to the Word for about 6 hours!! Then they began weeping, because they realized how much they had sinned against God…. they were repentant…  and worshipping God after it was read…. their hearts were revived and turned back to God.    Again, this happened in the month of Nisan.

It is also month to watch your speech.. be aware of what your confessions are.    Your Word confessions should “grab the wind” and change the atmosphere. Speak forth revival… in your life, your families, your city and your nation!